“Get Thee to a Nunnery”: Social Justice Beyond the Pale Wimple 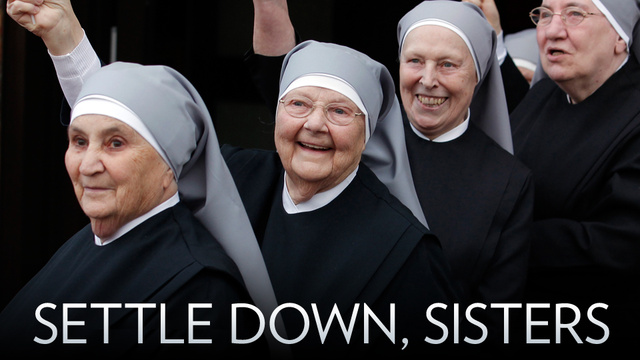 This is how Sister Margaret Farley came to my attention a couple of weeks ago, or maybe it was last week; a joke was made in regard to her punishment by the vatican , which was to be sent into seclusion. This little number was either on The Daily Show or The Colbert Report, but I can’t recall which at the moment. It’s saved in the PVR, but I’m not going to scroll back through those episodes right now.

At any rate, it was something that got me thinking that she was one hell of an awesome nun. Didn’t know her name, but I sent her mental kudos anyway for writing something down that would go so against her church, but also would rankle, quite frankly, in our overly sexed but super dysfunctional secular world.

So, I heard the story. And forgot about it.

But, lo and behold, the vatican is at it again, and so, The Colbert Report reminded me that I must do something about this story.

Religion. Sex. Feminism. Equality. Poverty! All the usual suspects that pop up over and over again in my stories.  Hurrah!

Since I am not hearing the character voices at this point, I have nothing to add. As said by our fiction instructor on the weekend, a story cannot be forced, but all germs must be collected.

So, with that in mind, I have lifted basically the entire lowercase vatican vs. uppercase Nuns story off of Colbert and into this blog post, because I simply couldn’t do justice to the insanity with my own words:

“The pope is finally bringing the hammer down on a subversive group of extremists. Tensions have been building for years between the vatican and american’s catholic nuns (apparently the computer wants me to capitalize the vatican…sorry)! And now the vatican has reprimanded the organization of catholic nuns in america of falling out of line with church teachings and promoting radical feminist themes.”

“American catholic nuns are being criticized by the vatican for spending too much time helping the poor and nursing the sick instead of fighting against same sex marriage and birth control. The vatican praises (insert backhanded compliment now)the nuns for promoting justice, but slams them(get ready for it, here comes the wonderful juxtaposition of oxymoronery) for protesting church doctrine on women’s ordination and homosexuals (umm, so this is the ever so popular social justice for…all-ish that we’ve heard ever so much about…yes? hmm).”

Meet Sister Margaret Farley, a nun pro “everyone getting it on in a respectful, mutually awesome kind of way” in her book, “Just Love.”

Secondly, here’s the other mega problem with this devil’s babble: “The church has condemned Farely’s book saying,’masturbation is an intrinsically and gravely disordered action.'”

Ok, ok, before we all get lost in the TITillation (see what I did there? made you think I was being all mature and classy and then I stooped. Damn. No, darn. No, I mean…nothing. No bad words anymore….)

But seriously, there is an array of social import here. Sexuality is a huge powder keg, the giant dysfunctional taboo crawling around like a silverfish in and out of bathroom cracks (and we all know the many reasons why the word crack is whack).

Because I don’t even know, I must go lie down on my yoga mat before I go to class and let it percolate. Oh, sigh. “HUMAN SPECIES, WHY MUST YOU BE SO…..HUMAN!!!!!” SAYETH i.

Greetings Feline and Fellow Earthlings! In the interest in "brevity" I will attempt to summarize via lists. I AM, this is me, here we go, weee: writer, reader, lover of music, dance, theatre, animals, oddities, 2nd hand trolling through alleys and le boutigues of sally ann and value village, and the beautiful outdoorsy nature of my home. Big breath, leap #2: a veggie head, enviro eco freak, chocolateasaurus, transformer more than meets the eye, former ESL teacher, a happy auntie of Nicholas and Sam, my 2 sweetie pie nephews. Leap #3...welcome to me! Enough said, read my blog:)
View all posts by nala7299 →
This entry was posted in All You Need is Love, Love, Body Blissed, Body Cursed: A Trek Through Loss and Gain and Loss and Gain, Ha ha's and Tra La"s, Relation Ships, Sink or Float, Societies, Pieties, Unto Thee, I Shall Kneel: Religion, Work Schmerk: Volunteering, Schooling, Job-ing, Calling. Bookmark the permalink.